Resistance to wormers What is it and what does it mean?

We’ve probably all heard of the term ‘wormer resistance’ by now which describes parasites that have evolved to be no longer affected by the chosen worming treatment.

Much like antibiotics this limits the effective drugs we have to control infection. We have no more wormers in development; if we end up with resistance to all our available wormers then we will be forced to give up keeping horses on that land which could be devastating.

The table below shows the resistance status of these five main wormers. 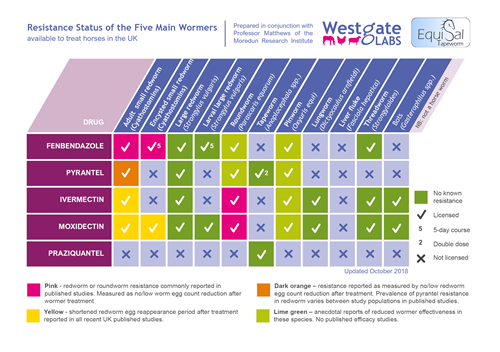 Click on the image above to open a bigger version as a .pdf

So what can we do to slow resistance?

It sounds obvious but a parasite can only build resistance to a drug when challenged by medication.  If we only worm when necessary – using worm egg counts and other diagnostic tools wherever possible to reduce the frequency of chemical doses that on its own will prolong the life of our wormers.

Develop a worm control plan to target testing and dosing to the right time of year – and don’t use a sledge hammer to crack a nut! Wherever possible we should reserve moxidectin (Equest) for a single winter dose to treat encysted redworm and use other effective wormers through the rest of the seasons to target adult stages of small redworm and other parasite challenges.

We can use reduction tests to measure wormer efficacy and monitor resistance; worm egg count before giving the wormer and two weeks after dosing.

Don’t under dose – know your horse’s weight and worm accordingly. Exposing the worms to a dose of wormer that is not enough to kill them is a sure fire way to build an army of resistant worms.

Reduce the worm challenge in the environment

Simply put this means poo picking, poo picking and more poo picking! Just as important in our armoury are husbandry and paddock management tips and tricks to break the lifecycle of the worms and reduce the reliance on chemicals.

Worm larvae passed in droppings hatch and become mobile within seven days at which point they leave the dung piles to re-infect the pasture. The milder and wetter the weather the further and faster the larvae can travel. Collecting droppings twice a week, even through winter is a sound investment in your worm control programme and keep muck heaps well away from grazing land.

Taking simple steps to beat resistance will help us to play the long game, preserving the efficacy of the wormers to give us many happy years of horse owning ahead. Please spread the message!

NEXT > View our top 10 ways to slow wormer resistance