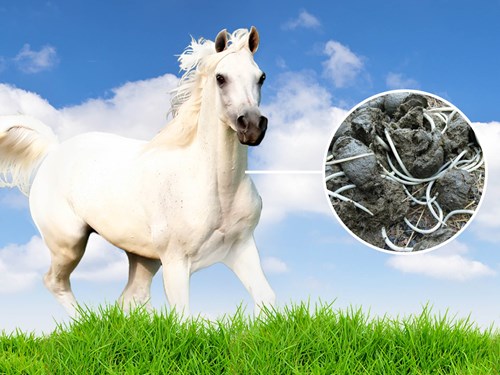 Parascaris equorum, or ascarids, are large creamy white worms, up to 40cm in length, most commonly found in foals and youngsters under four years of age. Young horses are susceptible to roundworm because their immune systems are not fully developed to be able to fight off an infection.

Occasionally these parasites also affect older horses - those grazed on pastures previously occupied by wormy youngsters or who have had a poor start in life - but the majority of adult horses have a good level of resistance.

Infection can have a devastating effect, especially in foals that may quickly accumulate massive worm burdens, leading to severe debilitation, poor growth, and even death. Intestinal obstruction or inflammation is a big risk causing constipation or diarrhoea while migrating larvae breaking into the lungs may cause haemorrhages. Look out for lethargy, weight loss, coughing, a rough coat or pot belly.

Good pasture management, regular worm counts and appropriate worming are important. Ascarid eggs can survive in the ground for many years as they are encased in a tough outer shell which protects them from freezing temperatures and dry conditions.

All broad spectrum wormers are licenced to treat roundworm, however there is documented drug resistance to ivermectin and moxidectin based wormers so they are less effective.
Treat with fenbendazole or pyrantel based wormers

Worm counts are a useful tool in the control of roundworm and should be carried out every 3 months, the horse wormed accordingly. The test monitors adult worms that are actively laying eggs. (Immature roundworm do not lay eggs).