Ticks are tiny bloodsucking parasites of mammals (including horses, humans, dogs and cats) whose prevalence is on the rise in UK. They belong to the taxonomy group called Acarina, together with spiders, mites and scorpions.

Species vary in colour from reddish to dark brown or black and differ in size, depending on the type, age and sex of the tick, and whether they have fed. Empty ticks are as little as 0.5mm (the size of a poppy seed) up to 3mm (sesame-seed-size) and small, oval and flat. Once fed, the engorged body becomes considerably bigger to resemble a grain of rice or small bean.

Ticks don’t have wings to fly and cannot jump; they travel by walking on the ground and up plants, attaching onto passing or resting hosts by using special hooks on their legs.

There are over 20 species of ticks in Britain; most have been known to attach to people or pets. Which species are most abundant depends on the area, habitat and surrounding wildlife but three particular ticks are most common; Ixodes ricinus (the sheep tick, wood tick, deer tick or castor bean tick); Ixodes hexagonus (the hedgehog tick); Dermacentor reticulatus (the marsh tick).
Wildlife and farm livestock are the most usual tick hosts but as horses, people and pets send out the same signals (body heat and chemicals), a questing tick will instinctively climb on board from the tip of grasses or leaves of shrubs and bushes.

After climbing onto a host a tick will crawl around searching a good place to bite before attaching to start its blood meal which can last up to three days. They then drop to the ground for moulting or egg laying.
As a consequence of this behavior, the highest number of infesting ticks will be found in and around places most visited by livestock: water and feeding points, preferred resting places (e.g. below large trees in the pastures), etc. In such places a horse may pick up several ticks.

Ticks are more prevalent in areas of high livestock and/or wildlife density, typically in rural areas such as forests, woods and areas of grassland such as heath and moorland. Some areas of the UK are often referred to as tick ‘hot spots’ such as the New Forest, Exmoor, the South Downs, Thetford Forest, the Lake District, the North Yorkshire Moors, and the Highlands and Islands of Scotland. However, there can be localised ‘hot spots’ in many areas.

While tick bites are generally more of a risk April – November they can be active at temperatures as low as 3.5°C. They use plant debris to shelter in during cold weather and as our winters get warmer it is increasingly likely to see incidences and populations increase.

Suffering one or two tick bites is rarely problematic for an animal; only in larger numbers do they become a source of irritation and potential anaemia through blood loss. Very occasionally would a host be overwhelmed by the general toxaemia and immune challenge that can occur when exposed to sufficient tick saliva. More worryingly many ixodids can transmit a variety of potentially dangerous microbial diseases, including Lyme Disease (Borreliosis), Babesiosis, Anaplasmosis/ Ehrlichiosis, Bartonellosis, Q-fever and the Louping ill virus.

Lyme Disease is a serious tick-bourne infection caused by the bacterium Borrelia burgdorferi that can affect any animal including humans. Clinical signs appear in less than 10% of infected horses, the most common symptoms being lameness and behavioral changes. The lameness is usually associated with larger joints and frequently shifts from limb to limb. The horse may appear to have a generalised stiffness, sometimes with fever.Laminitis has occasionally, been associated with Lyme disease.

Behavioral changes are also difficult to determine. As well as an unwillingness to work (potentially associated with musculoskeletal pain), owners frequently observe increased irritability and a changed attitude in these horses.

Diagnosis of Lyme disease in horses is particularly difficult for two reasons: horses are subject to many musculoskeletal injuries and abnormalities that can result in lameness that may not always be associated with Lyme disease; the blood tests commonly used for diagnosis detect antibodies to Borrelia burgdorferi and since subclinical exposure is common, a positive antibody test only indicates that the horse has been exposed to Borrelia burgdorferi, not that his illness is related to Lyme disease.

Although not every tick carries disease, immediate removal of an attached tick is recommended. The longer a tick is allowed to feed, the more organisms can pass into the bloodstream of the host. Regular checks will also help to find them before they have had a chance to attach and feed. Use a safe method of tick removal such as the O’Tom Tick Twister. Available in our online shop, just £3.50. 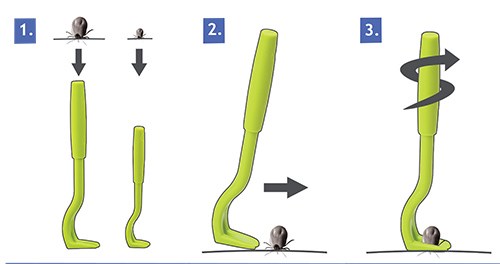 DO NOT use petroleum jelly, any liquid solutions, or freeze/burn the tick, as this is likely to stimulate it to regurgitate saliva and stomach contents, increasing the chance of infection.
A tick bite can cause irritation and reddening at the bite site. This reaction is common and caused by the body’s immune response against the tick’s saliva. It will usually settle down within the first couple of days without requiring veterinary attention. A topical bite relief cream can be used to make the area more comfortable.

Scratching at a tick bite (or any insect bite) can introduce bacteria and cause a localised infection. Seek medical advice if there are continued signs of reddening, swelling and heat, or weeping at the bite site.
You may want to save the removed tick for identification in case the person or animal becomes ill over the following weeks. To preserve it write the date of the bite in pencil on a piece of paper and put it with the tick in a sealed plastic bag and store it in a freezer. Your vet can then identify that a tick bite has occurred and use this information to assist in making an accurate diagnosis.

A vaccine against Lyme disease is now available for dogs in the UK & Ireland but no such preventative is currently available for horses. Talk to your vet for more information.