Lungworm in horses and donkeys 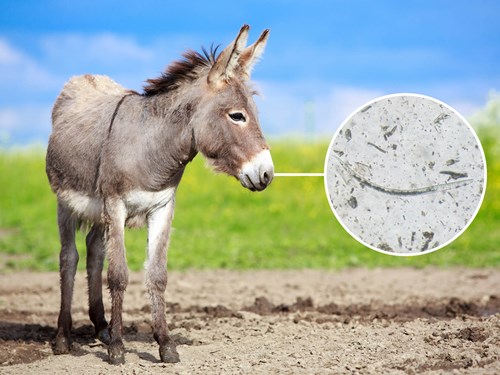 The lungworm, Dictyocaulus arnfieldi is, as its name suggests, a lung parasite that affects donkeys and other equines. Donkeys are their preferred host and it is rare for an infection in horses to result in the development of egg producing adults.

Nevertheless lungworm can cause clinical symptoms in both species, particularly where horses graze alongside donkeys or mules, although the levels of risk are relatively low. Mules can also contract lungworm although it is uncommon.

How are equine’s infected?

Dr Faith Burden, Veterinary Projects Manager for the Donkey Sanctuary, is keen to dispel misconceptions about parasite infection levels in donkeys in the UK. She commented:

Donkeys, horses and ponies can live together very safely, providing we are alert to the potential for lungworm and address this in a parasite control programme with your vet or SQP.
Larvae ingested by the horse or donkey penetrate the wall of the intestine and migrate through the circulatory system to the lungs where they develop into adults. The lungworm takes 5-6 weeks to reach maturity, growing up to 8cm long and resides in the bronchi and bronchioles of the lungs.

Lungworm are more prevalent on wet grazing land. The larvae can live in the ground for a considerable length of time, so good pasture management such as poo picking and cross grazing with other species can help to reduce infection without the need to rely on chemicals.

The presence of the worm in the lungs can cause significant damage especially in poor animals when there is an overwhelming number. Infection irritates the mucosa leading to parasitic bronchitis and mucus is produced, causing difficulty in breathing, severe coughing, and loss of appetite.

If a lungworm infection is suspected then a faecal sedimentation test can be used to confirm this in the laboratory. This separates out the comparatively heavy larvae of the lungworm from the faecal matter for identification under the microscope. Because the parasite rarely reaches egg laying potential in the horse, it is often better to test the donkeys or mules thought to be the host of infection, rather than the horse that is showing symptoms.

Testing is carried out all year round and treatment is recommended if any evidence of lungworm infection is seen in the sample. A sedimentation test requires 2-3 times the amount of faecal matter than a worm egg count and takes a number of days to complete.

Ivermectin and moxidectin are the most effective treatments for lungworm. Both can be used in horses but not all ivermectin based wormers or moxidectin are licenced for use in donkeys. If in doubt, check with your vet or SQP. The Donkey Sanctuary recommends using the Eqvalan brand over generic ivermectin wormers because of treatment results they have seen in their animals.

In line with all equines the British Equine Veterinary Association advocate a targeted worm control programme for donkeys based on worm counts and tests. Treatment should be given only if the tests indicate and for specific seasonal problems like encysted redworm, lungworm, bots and pinworm. This is to help slow down resistance to the drugs as well as being better for the donkey and the environment.

Worm counts should be carried out every three months to test for redworm and roundworm and an EquiSal saliva test taken every six months to test for tapeworm. While the EquiSal test has not been scientifically validated on donkeys at post mortem level, we still test many donkeys with good effect. Foals, youngstock and those who have had a poor start will require more attention.

A winter dose for the possibility of encysted redworm should be given between December and February with a 5 day dose of fenbendazole with a resistance test to test efficacy (moxidectin is not licenced for use in donkeys).

If tapeworm treatment is required then double dose with pyrantel is advised as praziquantel is not licenced for use in donkeys.
Mules should be treated in line with advice on donkeys.