Neck threadworm (Onchocerca cervicalis) is an unusual parasite of horses more often found in tropical climates but still sometimes seen in the UK. The mature worms are long and thin (between 6-30cms) and live in the nuchal ligament, a large elastic structure that runs along the topline of the horse and supports their head and neck.

The adult worms of Onchocerca cause comparatively few complications but they reproduce by releasing tiny microscopic larvae called microfilaria into the skin. It’s these which horses can develop a reaction to and which bring about the majority of the problems associated with these parasites. 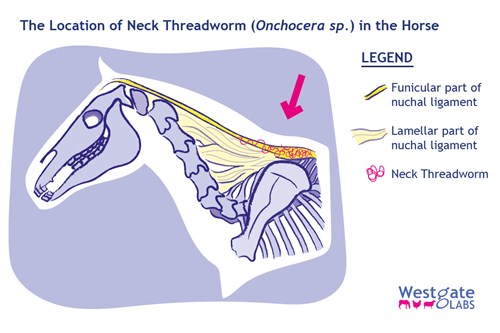 An infection of neck threadworm causes what is clinically referred to as a subcutaneous filariasis - a parasitic disease caused by an infection with roundworms spread by a blood-feeding insect – in this case biting midges (Culicoides sp.)

In neck threadworm this is most often characterised by intense itching mostly around the head, neck and shoulders of the horse, sometimes travelling under the belly as the horse reacts to the microfilaria. The base of the mane infront of the withers seems to be a particular hotspot. The rubbing creates trauma to the skin resulting in hair loss, lesions or crusts and swelling. Horses can also exhibit small lumps along the underside of their neck and face.

Very occasionally, microfilaria can also migrate through the eye, clouding the cornea with a blue oedema to the front of the eye.

Adult neck threadworm can live for up to 10 years and their lifecycle takes around 4-5 months to complete through a complex development process that relies on an intermediate hose of the midge (Culicoides sp.). Individual worms reproduce on their own without need of males. They release thousands of tiny microscopic larvae per year called microfilaria from the nuchal ligament under the skin of the horse, the production peaking in spring.

Itching occurs where the microfilaria cluster, bringing blood to the area which attracts biting midges that feed on the horse, ingesting some of the larval Onchocerca with it. The larvae undergo further development within the insect before being deposited back into a host horse some days later when the midge feeds again.

Once returned the larvae travel back to the nuchal ligament via the horse’s bloodstream where they complete their development into adult worms to continue the lifecycle.

Because the worms don’t inhabit the intestinal tract at any stage of their lifecycle they aren’t detectable on a worm egg count. Instead a biopsy of the nuchal ligament may be necessary to determine whether Onchocerca spp. microfilaria is the cause of dermatitis. It is common for a dose of ivermectin or moxidectin to cause a brief worsening of symptoms as microfilaria larvae die off before itching calms. Speak to your vet if you suspect an infection.

There’s currently no known way to eradicate the adult neck threadworms, instead it’s a case of management of the microfilariae to reduce itching symptoms in the horse combined with symptomatic therapy to relieve itching.

Work with your vet to devise a schedule of worming treatments (usually ivermectin administered every 8-12 weeks) timed in accordance with the larval lifecycle or more regularly during the Spring surge. Please note SQPs or RAMAs are not able to prescribe wormers for administering more frequently than the data sheet dictates. That is 8-10 weeks for ivermectin and 13 weeks for moxidectin.

Being mindful of wormer resistance please be especially careful in minimising moxidectin exposure and only utilising this for neck threadworm in combination with targeting encysted small redworm treatments.

It’s also advised to take steps to strengthen the immune system to help reduce the allergic reaction. Including a probiotic alongside worming and using other proprietary nutritional supplements can help in this.

Other management techniques include protecting the horse from midges with stable management, fly rugs, and repellents to minimise infection risk and taking steps to soothe the damaged skin and reduce the itch will in turn help to reduce reinfection.