Bots (Gasterophilus spp.) aren't horse worms but rather flying insects, a bit like a scrawny wasp, whose life cycle is inextricably linked with the horse. Their development involves four distinct stages —egg, larva, pupa, and adult fly, only the latter living independently from their equine host. 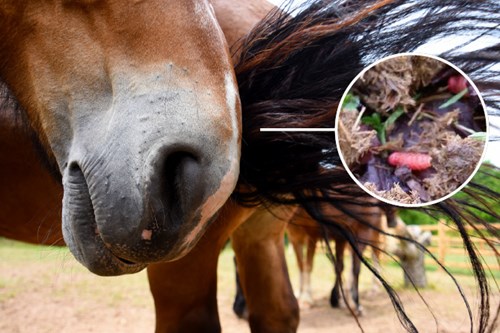 The three main species that affect UK horses can be differentiated by where they lay their eggs on the horse:

G. intestinalis (the common bot) lays pale yellow eggs on the hair of the body, most usually the shoulders and forelegs. These eggs are ingested into the horse’s mouth as it rubs itself, the moisture and warmth of the mouth prompting the eggs to hatch a pinhead-sized larvae in about a week which burrows into the gums, or beneath the tongue.

Much less common is G. nasalis (the throat bot) which lays yellow eggs around the chin and throat under the jaw area of the horse’s face and G. haemorrhoidalis (the nose bot) which lays black eggs on the hair around the horse’s lips. Eggs of these larvae hatch and crawl into the mouth within a few days to burrow into the gums and beneath the tongue. 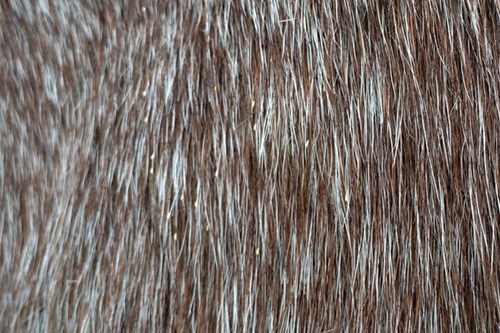 bot eggs on the horse's coat

For all bot species these tiny motile larvae stay in the mouth for three – four weeks before emerging to make their way slowly down to the gastro intestinal tract to burrow into the gut wall. The common bot attaches to the top part of the stomach, the throat bot to the small intestine around the duodenum and the nose bot to the mucous membranes of the stomach or rectum.

Here the larvae remain for around 10-12 months, feeding off the contents of the horse’s gut and maturing until spring or early summer when they will detach from their surface to be passed out in the host faeces. They are only found on pasture, as they do not survive well on stable bedding. The pupae are known to be sensitive to frost and moisture, so the environmental conditions present play a significant role in the success of the parasite.

The bot larvae pupate in the soil for 3–5 weeks, after which the adult bot fly emerges.

Adult bot flies are medium to large brown striped insects, 10-20mm long, a bit like a scrawny wasp or drone bee with a single pair of wings. Once hatched the adult flies survive long enough to mate and lay their eggs on the horse, dying once nutrients remaining from their larval stage are used, usually in around 2 weeks. 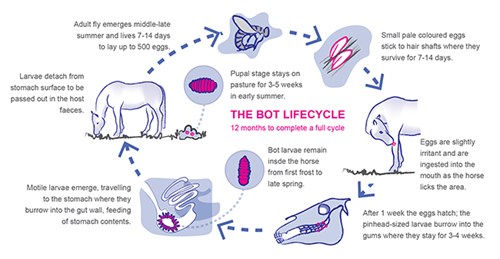 Only in rare or extreme cases will bots cause disease or discomfort to occur in the horse and large numbers can be present with no clinical signs. The first instars (larvae) migrating in the mouth can cause inflammation of the mouth and gums and in rare cases, purulent discharges to form in the sinus tracts.

Once in the intestinal tract severe infection can impact a horse’s ability to digest its food, resulting in a decline in condition. Bots can cause a mild gastritis by damaging the stomach lining, their burrowing causing ulceration and abscesses which can trigger colic. Digestive juices can aggravate the ulceration with the potential for breaches of the stomach lining which can prove fatal through peritonitis. Fortunately these events are extremely rare.

Bot infection can be hard to detect. There’s no way to test for the presence of larvae in the horse and it’s rare to see the larvae expelled in the dung. If bot eggs have been seen on a horse in a herd it should be presumed that all horses need a worming treatment for them.

Although we discuss ‘worming’ to treat these parasites they are not technically worms like redworm or roundworm but flies. There are only specific times when treatment will be effective depending on their life stage.

FLIES: Insect repellents can be used to try and repel the bot fly but these won’t deter them entirely.
EGGS: Once eggs are laid on the coat these can be scraped off the hairs using a bot knife or blunt metal edge to try and minimise infection.
LARVAE: Ingested larvae aren’t treatable until they’re in the stomach of the horse. Veterinary guidance is to target them with a single treatment, waiting until after the first frost of the winter which will kill bot flies and ensure no more reinfection. Ivermectin and moxidectin are both effective chemicals and you could choose to combine this with your winter worming dose against encysted redworm.
PUPAE: Sensitive to frost and moisture.

Bot species are geographically more active in the South and Midland areas of the UK with little to no activity being reported north of Yorkshire as the weather gets cooler. This could change as the global warming effect increases.