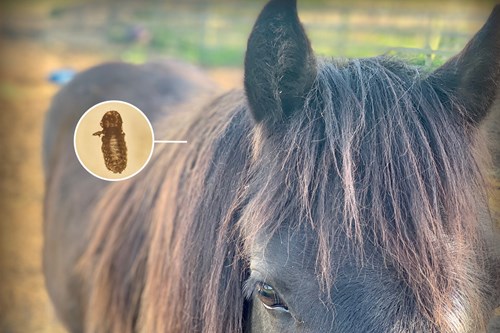 Squeamish things come with the territory in our line of work but usually of the wriggling variety rather than crawling beasties. But when one of our youngsters, a fell pony filly belonging to our office manager Sarah, was observed persistently rubbing her mane it was time to investigate. Sure enough an unwelcome surprise awaited… the geek in us couldn’t wait to get a look at them under the microscope. The other half, well we just wanted a good itch!

The geek confirmation? You guessed it, lice.

Lice are tiny, wingless insects that live on the exterior of the host animal in the dense hair around the base of the mane and tail, on the body and, in the case of the sucking louse, in the leg feathers. For this reason they fall into a group of parasites called ectoparasites. Infestations are common in horses all over the world, especially in temperate climates. They can affect any horse, even those in otherwise good health, but young, old and those with compromised immunity such as Cushings disease are more susceptible.

They tend to favour those with thick coats such as cobs and native breeds and they’re most prevalent in the winter and early spring. Djinn is ticking a lot of boxes here and being young is also a probable factor.

As an interesting aside, Djinn’s worm egg count results have also shot up this month. She’s gone from counts of <50 eggs per gram through February and March to showing a count of 5,000 e.p.g for redworm when tested on the 22nd April. Young horses are prone to parasite infection but such a big increase along with the lice infestation indicates her immune system having been significantly challenged over the last few weeks.

Types of Lice in horses

The chewing louse Bovicola equi is most common. These tend to be moving when you part the hair and as they feed on the horse’s dander prefer to live in the finer hair on the head and neck as well as in the mane and on the flanks and croup, and at the base of the tail.

Sucking lice Haematopinus asini feed on blood by embedding their mouthparts into the roots of a horse’s hairs. To find them, part the horse’s hairs all the way to the skin. The insects will be stationary, not moving around. Generally, they prefer to be in areas where a horse has longer, coarser hair, such us under the forelock and mane, the tail and on the legs of long-feathered horses.

Specifically Djinn’s turned out to be an infestation of the chewing louse. Both types cause rubbing and restlessness and show flaky skin as a result. If your horse is itchy during the winter months check for lice!

The total life cycle can vary between 20 to 40 days and the whole lifecycle takes place on the host itself. Lice cannot jump or fly, however, they can spread easily to other horses in the herd. In the right weather conditions, adult lice may be able to survive for two to three days on hard surfaces, and the nits can remain viable for about three weeks.

Treatment: Djinn and the other two horses in her herd will be treated with a residual insecticide such as Deosect 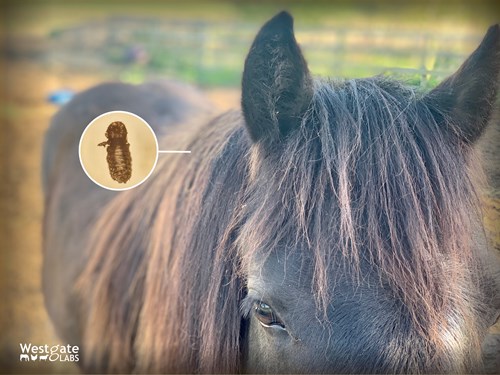