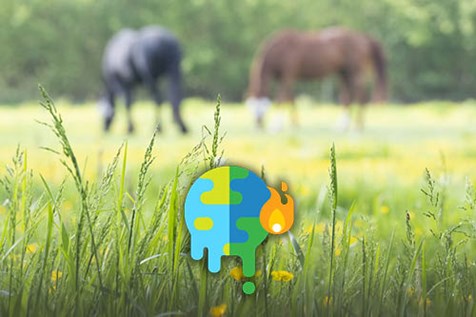 Climate change is already having visible effects on the world. The earth is warming, rainfall patterns are changing, and sea levels are rising. According to the Met Office it’s estimated that within the next 50 years our winters in the UK will become between 1 and 4.5°C warmer and up to 30% wetter.1

This has the potential to impact horse health in all sorts of ways we may not have considered, one of those being parasite control. Worms thrive in mild, wet weather so incremental temperature increases, particularly in winter, are going to bring increased parasite challenges to our horses.

A recent research paper found equine worm populations are consistently larger and resistance develops more quickly in tropical environments such as Florida in comparison to climates that benefit from cold winters. 2

There are several contributing factors to this. We know, for example, that worm activity on the pasture slows considerably when the daytime temperatures dip below 6°C. A reduced number of parasite larvae hatch from worm eggs laid in the horse’s dung in cold weather. These larvae are the infective stages of the parasite; their aim is to wriggle as far as possible from the dropping, climb a blade of grass and be eaten by a horse. Fewer on the pasture lowers the infection risk to horses.

Whether it is wet or dry has a huge bearing on the motility of these larvae. In dry environments, tiny immature small redworm larvae (the most numerous of horse parasites) can travel up to 1m from a pile of dung. This range increases to 3m in the wet conditions. Horses are less likely to graze near droppings and so the additional distance achievable with rainfall increases their chance of getting into a host to carry on the lifecycle.

The timing of worming treatments in colder/temperate climates such as Britain is also influential. Treatments given in winter are less selective for resistant worms than those administered in warmer months. This is because resistant worms are passing eggs onto pasture during periods of low egg/larval survival. In contrast, resistant worms surviving treatment in more favourable climates have greater opportunity to contribute their genetically resistant offspring to subsequent generations. 3

Not only does a longer period suitable for larval development result in an increase in the average size of the parasite population, resistance will also develop more quickly as there will be a larger influence from eggs passed by resistant worms surviving anthelmintic treatments.

What can we do about it?

Making a difference comes down to choosing the sustainable options for our worm control and for our planet wherever possible. From a parasite perspective, carrying out regular monitoring with worm egg counts (every 8-12 weeks) becomes increasingly important for horse health, basing our control strategies on testing and targeted treatment. We also need to be focussing customers on pasture management techniques like poo picking to break the lifecycle of the worms mechanically rather than relying on chemicals.

We all have a responsibility to take action on climate change – both by adjusting our own behaviour and by being more aware of the companies we buy from and their values and commitments to lowering the production of greenhouse gases.

Postal worm egg count specialists, Westgate Labs have been helping horse owners to manage sustainable parasite control for the last 23 years and they are working hard on environmental gains too. The company is establishing a 130 acre nature reserve on restored open cast land, combining ponds, scrub and woodland to create habitat for wildlife and provide carbon sequestration. Introducing compostable packaging in 2020 has helped to reduce their waste to landfill by 75%.