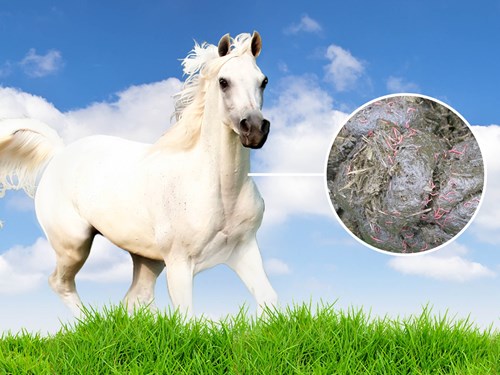 There are two types of redworm found in the horse – small and large strongyles.

Small redworm are the most common and arguably most dangerous parasite threat to horse health. They have a very quick lifecycle (as little as five - six weeks) and reproduce in large numbers; 95% of parasite burdens found in horses are small redworm. As well as large populations of adult redworm being problematic to the horse, cyathostomes also have an unusual developmental stage, where the larvae of some species burrow into the horse’s gut wall and encyst with the potential of causing serious consequences when they re-emerge. The small redworm is up to 2.5cm long, thin and usually reddish in colour (the unfed worms appear white).

While large redworm have the capability to cause more damage in the horse, their numbers have been vastly reduced over the last 40 years due to modern worming regimes. They have a migratory larval stage that can cause blockages in blood vessels, damaging vital organs and triggering life threatening hemorrhages and internal bleeding. The large redworm is a darker red and bigger than the small redworm at up to 5cm long.

Symptoms of both large and small redworm infections include loss of condition, weight loss and anaemia, distended stomach, staring or dull coat as well as diarrhoea and colic. Long term, small redworm infestation can seriously damage the intestinal wall, reducing the horse’s ability to absorb nutrients. The horse may become a chronic ‘bad doer’, and in some cases, a severe infestation can be fatal. Conversely it is also possible for a horse to appear perfectly healthy while carrying a significant worm burden. 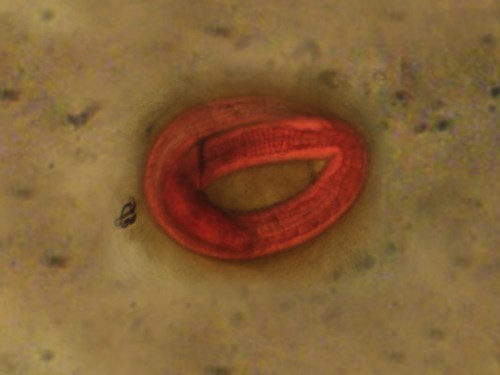 The majority of small redworm species go through a unique lifecycle stage that is particularly dangerous to the horse’s health. L3 larval stages of the worm burrow into the gut wall of the large intestine and become encysted. Some continue to develop within the gut wall, re-emerging soon after to become adult, egg laying worms residing in the large intestine.

Other larvae stay encapsulated for months or years within the horse’s gut wall, lying in a dormant state known as inhibited encysted larvae. Tens of thousands of these encysted larvae can line the intestine, where they impair absorption of nutrients, resulting in possible weight loss and life-threatening illness. Here they wait until conditions, such as a change in season from winter to spring, triggers a ‘mass emergence’ from the gut wall. This activity can cause cause life-threatening bowel inflammation, known as colitis (larval cyathostominosis) in the horse. 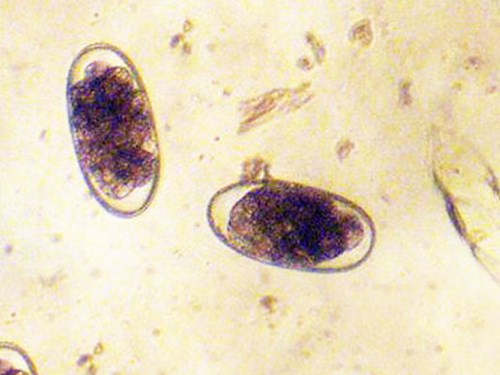 Worm egg counts are a reliable tool to detect adult egg laying stages of small and large redworm as well as roundworm. They should be used regularly, every three months throughout the year, to test for infection levels and target treatment if required if the worm count rises above 200 eggs per gram.

A worm egg count won’t distinguish between large and small redworm eggs but as the treatment is the same for both parasites this is not problematic. Horses are not meant to be completely worm free and using the drugs in this way helps to reduce resistance as well as being better for the horse and the environment.

A worm egg count will not show encysted stages of small redworm as the larvae do not lay eggs. Scientists are currently working on developing an antibody test to detect any levels of infection by measuring the immune response of the horse. Until a test is available that allows evidence based treatment then a suitable wormer should be given once a year in the winter months to guard against the possibility of encysted redworm.

Regular worm egg counts help us to monitor horse’s worm burdens and build up a general picture of their health. Within a single herd it is very common to see 80% of the worms in 20% of the horses. This is because some animals are more disposed to carrying parasites - this could be because they are young or old, they have a compromised immune system, or simply that they have favourable gut conditions or grazing habits for the parasites. These animals are known as ‘high egg shedders’ and it is useful to identify them in your herds so that they can be managed accordingly.

Scientists have developed an antibody test to detect any levels of infection by measuring the immune response of the horse.

According to advice, horses with previous faecal egg count results of more than 200epg within the last year are considered high risk and may not be appropriate for this innovative test, so should receive a routine treatment.

If your horse is classed as low risk with counts of less than 200epg over the last year, is in a closed herd with good paddock management and there is frequent poo picking, then chat to your vet further about this test. More information on the Small Redworm Blood test here.

Every horse that does not require a moxidectin dose is helping preserve to the chemical and delay resistance.

If your horse doesn't qualify, or you are unable to carry out the blood test, then a suitable wormer should be given once a year in the winter months to guard against the possibility of encysted redworm.

A number of wormers are licenced to treat adult stages of redworm including fenbendazole, pyrantel, ivermectin and moxidectin.
Of these only moxidectin and 5 day courses of fenbendazole are effective against encysted stages of small redworm.
There is now documented cyathastome resistance to the older chemicals, fenbendazole and pyrantel. These drugs should only be used if a resistance test has been carried out to confirm efficacy. Please ask for more details.

Egg reappearance times for other wormers are also reducing which is the first sign of developing resistance to these chemicals. It is therefore imperative that we use targeted parasite control programmes to slow the development of resistance and prolong their effective use.

For this reason moxidectin use should be preserved for winter dosing only and other chemicals used when necessary at other times of year.
Where there is no resistance then they are still useful drugs and it is worth noting that pyrantel and fenbendazole would be the preferred treatment for roundworm or pinworm infections. 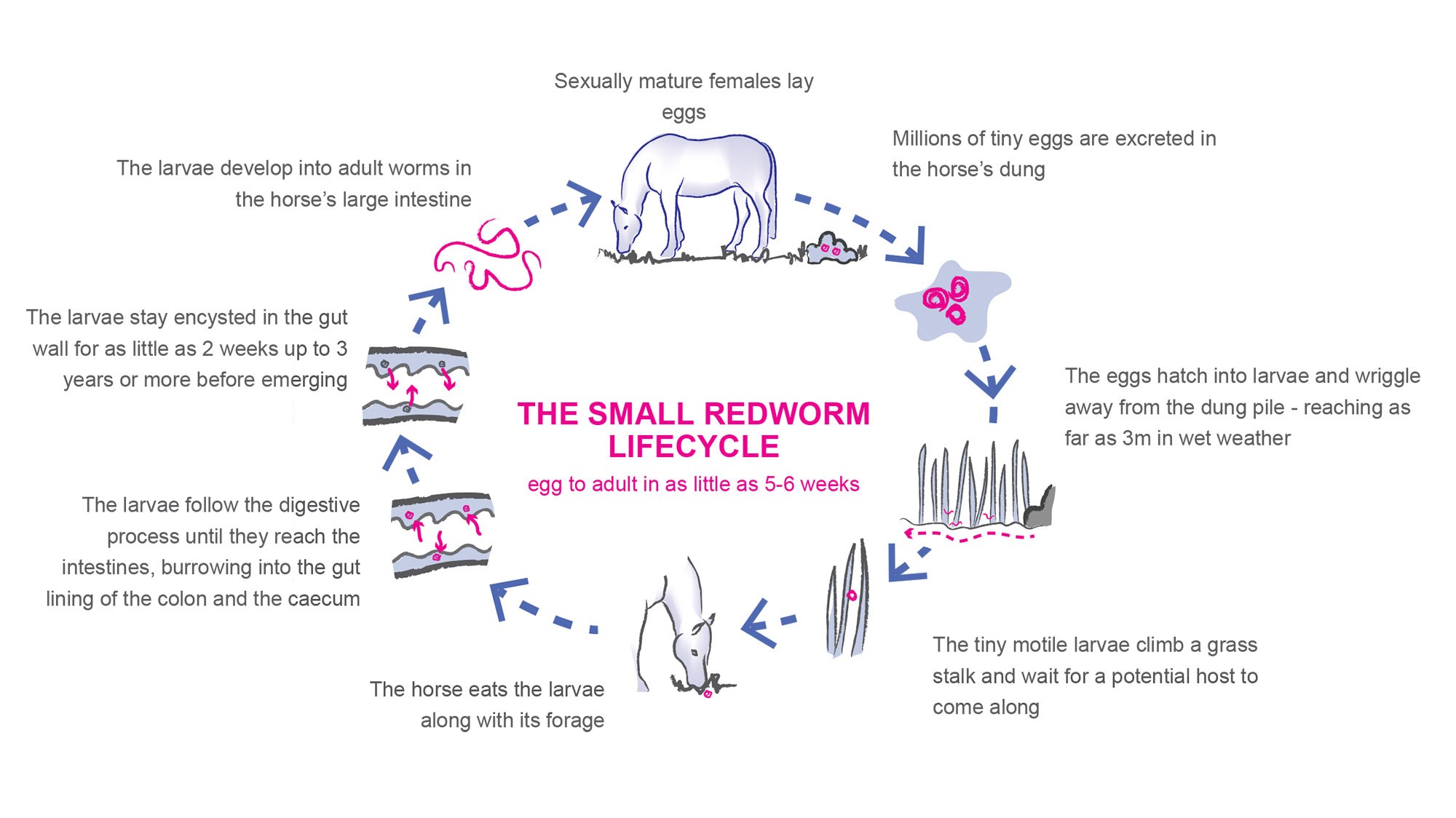 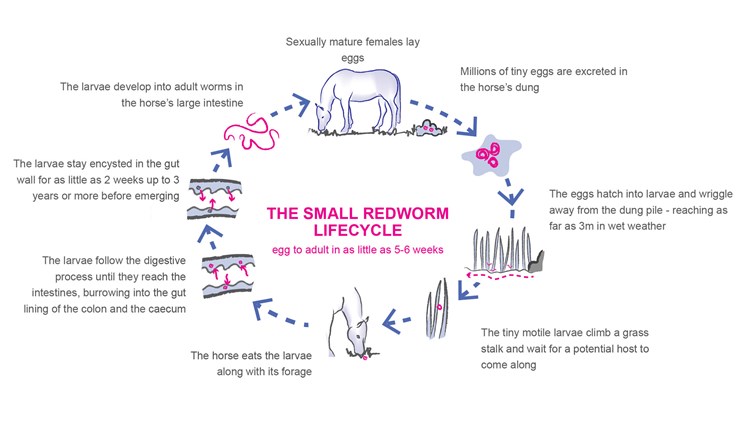