How dung beetles could revolutionise your horse pasture 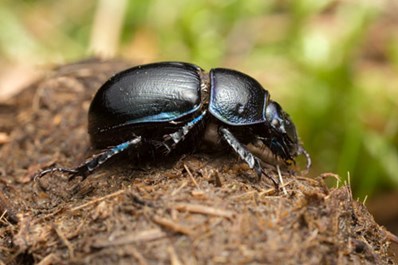 There is much more to the grazing land we use for our horses than might first meet the eye. Part the grass and with any luck you’ll find a complex ecosystem of flora and fauna that helps support the land itself. To celebrate National Insect Week we take a look at the dung beetle, its role in our pastures and why we need to take greater care of these amazing creatures.

Herbivore dung is a rich resource of food and shelter for beetles, flies and wasps. These insects have evolved to rely on an animal waste product that is in plentiful supply and in return they play a major part in the decomposition process; without them we would all be knee deep in it! Turn over a fresh dung pile and there should be hundreds of dung beetles and other insects present.

There are over 40 species of dung beetle in the UK and according to ecologist, farmer and TV presenter, Dr Sarah Beynon, the dung beetle population is “a great indicator of the environment and how healthy that system is.” (podcast for National Insect Week 2014) The more the better!

Dung beetles can break down large quantities of faecal matter by eating and nesting in it, some species tunnelling it into the ground to use as food and insulation for eggs. These actions increase organic matter in the soil, improving its ability to retain water and increasing nutrient availability to plants as well as aerating the land - beneficial for both root structures and other organisms.

Importantly this activity is also thought to break the parasite life cycle by removing the dung medium that acts as the incubator for the parasite eggs. This prevents the worm eggs hatching into motile larvae which would otherwise wriggle away from the dung and climb the grass stalks to re-infect the grazing horses.

However, while our animals produce as much waste as ever, this invaluable range of services is under threat as dung beetle populations in the UK have suffered widespread decline. One of the biggest factors cited for the reducing numbers is worming medication used to control parasite levels in horses and farm animals.

Traces of worming medication in the dung are toxic to invertebrates and can kill the dung dwelling insects as an unintended consequence. As well as breaking down dung the beetles themselves are food for wildlife such as birds and bats –a smaller population will have a knock on effect here too.

So the question we need to ask is how do we prevent the need to worm our horses from becoming  a major threat to the insects in our ecosystem?

1. Follow a targeted worming programme and worm only the wormy horses.

2. Avoid treating all stock with parasiticides at the same time if possible.

3. If using a wormer keep animals off the pasture for as long as possible (48 – 72hrs) so dung beetles don’t come into contact with contaminated droppings.

4. Worm when dung beetles are less active – during winter months.

5. Where there is a choice of effective chemical, try to use the one least toxic to dung beetles. Ivermectin is one of the most used and most harmful wormers; moxidectin is moderately toxic, while pyrantel, fenbendazole and praziquantel are least likely to impact invertebrates – though they may still have an adverse effect on other fauna.

National Insect week is run every two years by the Royal Entomological Society and supported by a large number of partner organisations with interests in the science, natural history and conservation of insects. More information at www.nationalinsectweek.co.uk