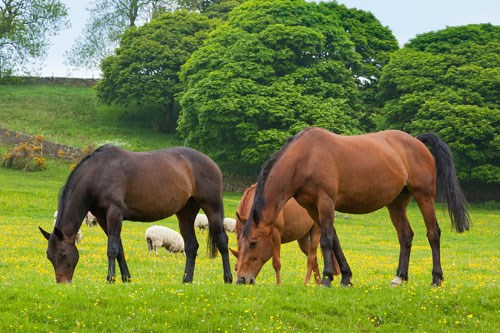 While some parasites like redworm and tapeworm provide a constant challenge to our horse’s wellbeing there are others which only become a threat under more specific conditions. The liver fluke, usually thought of as a parasite of sheep and cattle, is one such worm that does not need routine treatment in horses, but nevertheless we should be aware of when planning a strategic worm control programme.

Sheep farmers can relate the devastating impacts the liver fluke had on flocks in the 1950's and 60's. Since then fluke appeared to become less prevalent until a recent succession of wet summers and mild winter weather which has seen cases on the rise again over the last few years.

Any horses grazing heavy land that doesn't drain well and particularly those that are co grazed with other species could be susceptible to this parasite. This is because the fluke relies on a species of mud snail as its intermediate host in summer months. The grazing animal then ingests the cysts which become immature fluke and tunnel into the liver.

“The very mild and extremely wet conditions that we have seen throughout the UK this winter has meant that the survival of all the internal parasites of sheep and cattle on pasture has been prolonged.

"This means we have been seeing more cases of PGE in lambs and more Liver Fluke cases than we might otherwise have expected and the risk of further disease remains high especially in those areas of Scotland, Wales and Western England with a higher Liver Fluke forecast this season. Chronic liver fluke will be encountered in flocks during late winter/early spring unless action is taken now.”

Symptoms of liver fluke in the horse

Because the liver is a resilient organ symptoms are often hard to spot until significant damage has been done. The most common sign of liver fluke in the horse is chronic anaemia and horse owners should also look out for soft dung, a dry coat and weight loss. Mild jaundice can also sometimes be observed. Thankfully unlike sheep and cattle horses rarely die of liver fluke infection.

There are several methods, both invasive and non-invasive that can be used to monitor for the presence of liver fluke. The good news is that we don’t have to rely on post mortem!

A faecal worm egg count is one of the most commonly used detection tools. Due to the liver fluke’s complex life cycle the test is best done between February and May. 8-10 weeks after infection the liver fluke becomes a mature adult, migrating to the bile ducts of the animal’s liver to begin egg production. These eggs can be seen in a faecal egg count using a specific lab process to ensure flotation of the heavier eggs of the fluke.

Although a worm egg count is not a definitive test for liver fluke it is nevertheless a useful tool. Alternatively the more invasive ELISA blood test available through your vet will detect immature, as well as adult, egg laying stages of the parasite.

There are no drugs for liver fluke currently licensed for use in horses - some used to treat fluke in cattle and sheep can be toxic for equines. The only way to treat an infection is for medication to be prescribed off licence by a vet.