Do You Know How Much Your Horse Weighs? Guessing could be a disaster for wormer resistance 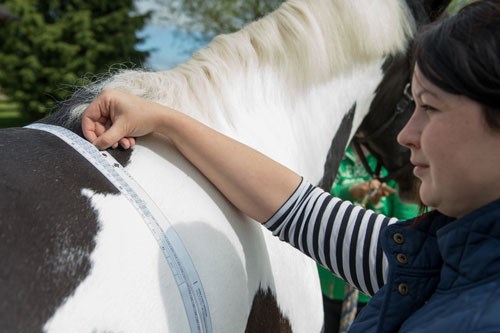 Do You Know How Much Your Horse Weighs?

Guessing could be a disaster for wormer resistance

With wormer resistance becoming more of a threat and the need to accurately calculate dosage therefore ever more important, would horse owners be any better at guessing horse weight than five years ago?

Being able to accurately assess the weight of an animal is important for many reasons, such as calculating medication quantities for wormers and in aiding dietary management. But unless you have ready access to a weigh bridge this is sometimes easier said than done especially as research shows weight estimates by eye can vary as much as 30%.

We tested the theory in 2017 with our Highland Pony, Bertie with fewer than 5% correctly estimating his weight, most underestimated his size by an average of 11%. Read Bertie's full guess the weight story here.

This time we upped the anti to look at Mikey who belongs to Westgate ambassador Laura Szuca, and asked users to calculate not just his weight but also to estimate the difference in a before and after photo . A 16 year old Irish Sports Horse, Mikey stands at around 16hh and recently spent time at bootcamp on a weight loss and fitness programme.

70 people responded to our call to action and the results were again fascinating with some significant variances which highlight how tricky it is to accurately judge a horse’s weight by eye. 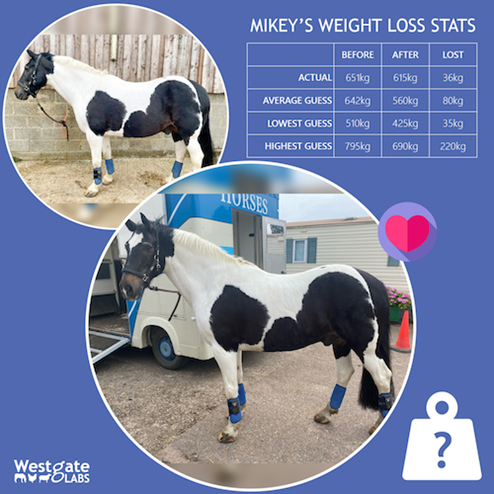 So what is the answer?

Mikey tipped the scales at 651kg before and 615kg after giving a total weight loss of 36kg.

Within the 3 kg tolerance that we set for the target, just 3% of people correctly estimated Mikey's 'Before' weight and his weight loss. The average (mean) guess was 642kg for Before and 560kg for After.

The most extreme estimates put Mikey at 220kg more than when he was at his heaviest and 226kg less than at his lowest! Worryingly, in terms of increasing wormer resistance, weighing him in by eye underestimated his size by an average of 22%.

Results from our experiment therefore prove that Mikey would have been under dosed if we had calculated his wormer quantity gauging weight by eye.

One of the golden rules of worming is to give enough chemical for the weight of the animal. Not doing so gives insufficient amounts of the active ingredient to kill the worms effectively while still exposing them to the drug and is one of the fastest ways to increase resistance.

A weight tape uses a defined formula to correlate equine girth size into estimated mass. They are generally a useful tool to use regularly for weight guidance, but as they only take in one measurement they don’t work for all horses. The biggest inequalities happen where fat distribution is uneven, so they may be slim on the girth but perhaps carry the weight on their crest or bottom. If you can it’s also worthwhile getting your horse weighed and using a tape at the same time to see how the results correlate.

Wormers are very safe drugs and so to overcome the challenges of estimating weight and giving sufficient dose, veterinary advice is to add 10% to a weight tape estimate when calculating wormer quantity.

Many thanks to everyone who took part in our online quiz, it just goes to show how looks can be deceptive!

For those that wanted to know how Mikey made such a great transformation, it was a combination of carefully weighed and appropriate forage and feed, lots of exercise based on interval training and swimming!

Mikey is a very good doer and can put weight on just by looking at long lush grass. His weight had crept up due to a period of lameness and box rest and so he had gone from being a bit in the chunky side to seriously needing to shift some weight. Laura restricted his grazing, soaked his hay, used a trickle feeder and weighed it every time too. She worked with her vet to restrict his diet but making sure to do it safely and carefully and his feed was reviewed and cut down to the bare minimum needed based on his work levels which was centred around interval training. Mikey was also sent to swimming boot camp as part of this weight loss and fitness programme, as it’s low impact on tendons and ligaments etc., but really intense and it made the difference!

Laura has managed to maintain his weight now for nearly a year and is hopeful that when the spring grass comes she can keep on top of it so Mikey stays looking and feeling that bit fit and lighter! To follow our ambassador Laura and Mikey, otherwise know as 'WannaBe In The Ribbons' - head to their Facebook and Instagram pages.