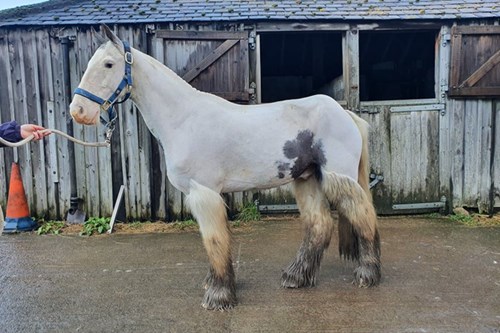 A run down immune system can leave a horse susceptible to all sorts of parasites.  Ghost is a 10 year old pony who Sarah bought in very poor condition 3rd January 2021.  As you can see, he arrived underweight, under muscled and also itching!  Closer inspection revealed his coat was crawling with lice and he had mites in skin under his feathers.

He was put into quarantine, given the first of his lice treatments, and had a worm egg count and EquiSal tapeworm test. Because of the time of year the vet also carried out a redworm blood test. Results revealed unwanted visitors inside as well as out; the worm egg count came back with 700 e.p.g. for redworm (a medium count so not as high as expected) as well as 100 e.p.g. for ascarid, which is interesting given his age as horses normally gain immunity to this parasite as they enter adulthood.

The blood test showed a higher than 90% chance of a red worm burden of 10,000+ so he definitely needed a treatment for encysted stages of small redworm.  One tiny piece of good news was a low tapeworm test result, at least one parasite he wasn’t carrying!

Given his extreme lack of body fat and the presence of ascarid, Ghost had a 5 day fenbendazole wormer (Panacur) as his first treatment.  This is one of only two chemicals licenced for the treatment of larval stages of redworm, the other being moxidectin.  We chose the former for two reasons; while there is known redworm resistance to fenbendazole, it is more effective than moxidectin at targeting ascarid, and secondly, moxidectin is stored in body fat and works by releasing slowly into the system up to three weeks after treatment.  If a horse is too lean to absorb the chemical effectively, then moxidectin can be toxic.

To measure the efficacy of the treatment, a reduction test (a second worm egg count) was carried out 10 days on from the end of the treatment course.  The result showed that Ghost’s worm egg count had come down to 50 e.p.g. for redworm with no ascarid eggs present- so a small amount of redworm resistance as might be expected. 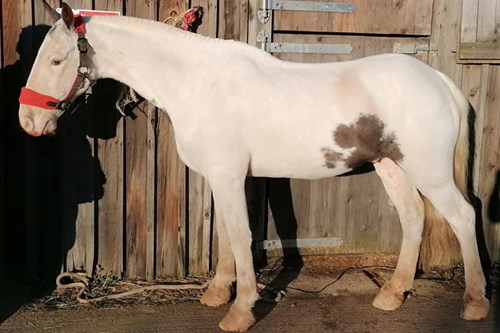 Ghost in February 2021, putting on condition

By the 9th February Ghost’s worm egg count had increased to 400 e.p.g. He had put on sufficient weight to have a moxidectin (plain green Equest) that would be effective to treat the medium count and ensure any remaining encysted redworm were dealt with. A reduction test confirmed this had been effective.

Alongside his worming treatment Ghost has been clipped out and de-loused again several times, had his teeth done, and hooves trimmed.  The dentist found a very large hook on both first lower premolar teeth, which will have made it painful to eat for some time.  This has definitely been a contributing to factor to him being so underweight, coming in at less than 300kg for a 13hh cob!

Now that he’s been treated for parasites the priority is to help Ghost gain condition and boost his immune system, which we hope will make him more resilient to parasite infection in the future. Sarah will continue to keep a close eye on him, worm egg counting at least every 8 weeks to begin with and checking his coat for signs of lice and mites.  Rescue horses, or those that have suffered high worm burdens, are often more susceptible to parasite burdens for the remainder of their life and need closer monitoring than others.

The interesting thing to note is how interlinked everything is. Whenever a horse’s immune system is compromised, it will mean they are more easily overwhelmed by parasites. For that reason, regular worm egg counts can provide valuable clues to your horse’s immune system.  If a horse usually has very low worm egg count results and they suddenly begin to rise for no other obvious reason then this can be early signs of the onset of Cushing’s, EMS or some other systemic condition and something worth chatting to your vet about. 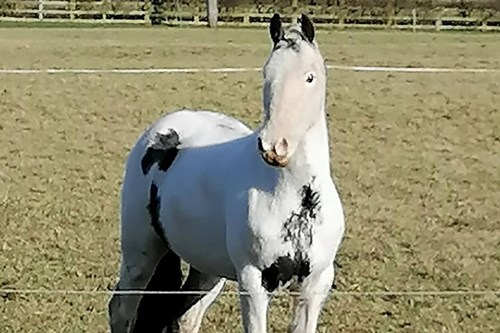 Ghost in March 2021 looking a whole lot happier about life!