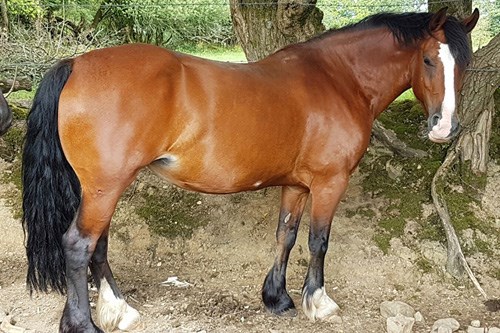 Sophie arrived with her current owner in poor condition. She had been grazing coastal pasture, was underweight and generally in poor health. Blood test results from her vet suggested she was suffering from sand colitis.

Not long after the vet’s diagnosis in May 2019 we received a sample from Sophie for laboratory analysis. A sedimentation test revealed a 7% sand burden in her faeces.

Following the results Sophie was moved to different pasture and began a diet supplemented by large amounts of dry forage. This not only helped her gain condition but also served to push any intestinal sand deposits through her digestive system.

Sophie was retested six months later in November 2019 and to the relief of everyone returned a sediment level of  <1% sand in her faecal sample. She is now glowing, and a picture of health.

WHERE DO WE THINK THE SAND CAME FROM?

Sophie was previously grazing mountains in a coastal region, the pasture was sandy and we suspect this is where she collected the sand in her digestive system.

The next step for Sophie is to retest in 3 months’ time to see what the level of sand is, if it continues to remain at <1% that’s fantastic – we would look at decreasing the frequency of testing over the wet winter months. However if it increases again, we would suggest treating with Psyllium and retesting a week after the treatment ends and to continue to monitor closely.

Above: Sophie, a picture of health after a few months of management for sand colitis
Below: Sophie soon after she arrived, in poor condition and suffering from sand colitis from grazing sandy pasture